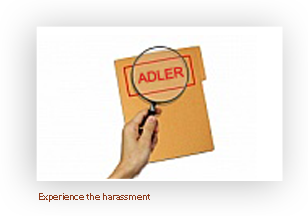 The presence of numerous public employees among those assaulting the silence around Rick Krlich’s neighborhood isn’t the only questionable behavior in this strange saga. The response of the city’s former Law Director and now sitting judge Jeff Adler creates doubt as to the administration of justice in Hubbard.

Not only did the former Law Director fail to process/prosecute many of the cases against horn blowers, he actually represented one offender, and withdrew from initial agreement to represent more, in appearances before a Trumbull County magistrate.

So ask yourself: He’s supposed to represent the city of Hubbard. The city has an ordinance against horn blowing except to ‘give warning’ to other drivers and pedestrians. Yet he goes into court with people that have been caught on surveillance cameras, and he defends them from being held accountable for violating the city’s law.

Ask yourself: If, as in the case of Mark Silvidi, the Law Director would have contacted the prosecutor in Girard, Robert Johnson, to have the horn violation charge dropped, would it be suspect? Krlich filed a menacing charge against Silvidi and took it to the Trumbull County Common Pleas Court, and that same Law Director represented Silvidi at the hearing.

That same Law Director represented the Clementes in the handling of John Clemente’s estate, which transferred his interest in the house to John Junior, initiating the property shell game that precipitated the horn-blowing torment. Under the statute requirements, this piece of real estate legitimately belonged to the state, even though the state hadn’t made a move to claim it as it should have under law. Therefore that house belonged to the taxpayers. The Law Director/legal representative did not report the effect of said transfer, thus avoiding compliance with the statute and sidetracking the compensation to taxpayers for Mary Clemente’s care. Ask yourself just who he was working for — the taxpayers, or a private entity?

Ask yourself if the Law Director’s political aspirations controlled his conduct.

Then ask yourself: Was this transfer tainted?

What would you think?